Has anyone else encountered this error before? When I’m selecting a file to view with the webpage widget all I get is a string of Times New Roman saying “Access Denied” and a string.

For context my webpage widget is using the variable “File to Text (variable)” in order to send the url to the widget. 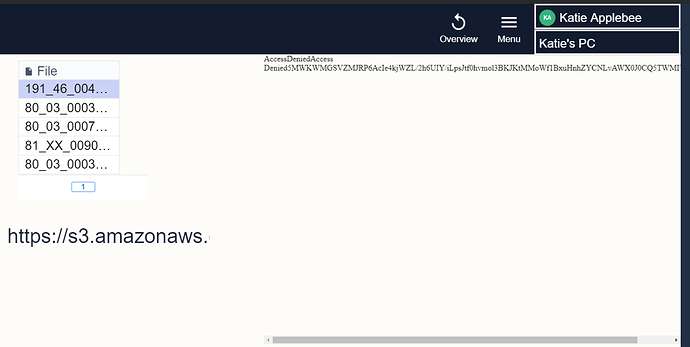 This is expected behavior when trying to access a S3 asset without credentials. When using something like the “open link” action, we pass credentials to this URL, so it is accessible.

What is the file type? Using the Variable or Table record widgets will show any STL or PDF files that are stored in tables.

I did have a similar issue when attempting to display Tulip-hosted images in a custom WBI widget I was creating. The solution that was presented to me was to use “Sign URLS” in the Tulip API.

So far as I could tell, you can’t call that API function from within the widget itself, (in the console it threw CORS errors) so I had to create a Tulip API connector and corresponding connector function in the Tulip app itself.

The way I handled it was to create a “Signed URLS” text array on my custom widget, then use Tulip app logic to call the “Sign URLS” connector function and feed the result into the “Signed URLs” variable.

It’s a roundabout way to do it, but it it at least allowed me to display images that are hosted on our Tulip instance.

In your instance, you could run the connector function when a file is selected and then feed the signed URL to your widget.

In this case what I was opening was a PDF. I uploaded it a couple weeks ago.

Does the webpage need the variable to be a “file” format or a text format of the URL?