I would be pretty cool to be able to copy button triggers to a step triggers, or app trigger, device and machine triggers

lets say that we already have a next button that is doing some comparations before continue to the next step, and we want to implement a foot pedal to go to the next step. in this case it would be cool to just copy that trigger instead of writing down it again.

This is a great idea, and something we definitely hear on occasion from users. The existing copying logic is a relatively new addition, but it is easily my favorite app editor feature.

There is a ton of work going on around how triggers work (to make them more intuitive and more powerful), this feature is part of that work. I can’t commit to a date yet, but parts of that project are just starting to be released, I would expect most of that work to go live in the next 6 months. Can’t share too much about the specifics of the changes coming in that project, but as an app builder, I’m pretty excited.

Great Feature request! I would love to have this option available. 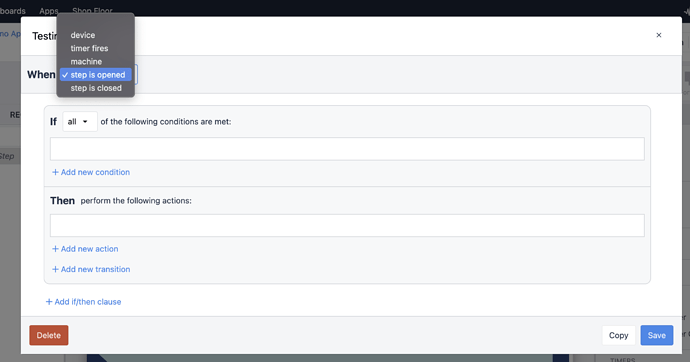 Check out some of the other details of r235 here:

you can now duplicate an action or a condition in the trigger editor! A new event was added to input components that can fire when the enter key is pressed!

Partially resolved per update from @Pete_Hartnett, but I’m going to close this one to consolidate discussion on copying triggers into other object types please check Search results for 'trigger copy' - Tulip Community